Evgeni Levin was born in Kharkov, Ukraine in 1922. Graduated from Kharkov Art College in 1941 and then Kharkov Art Institute in 1949 where he studied under professor D. Shavykin. The participant of regional, All-Ukrainian and republican exhibitions since 1950. The member of the Union of the artists of Russia since 1950. He taught in art school in Voroshilovograd, Ukraine, 1949-1950. He was best at genre painting, though keen on landscapes and portraits as well. Many of his paintings are in private collections and museums in Great Britain, Holland, Russiaf, Ukraine and United States 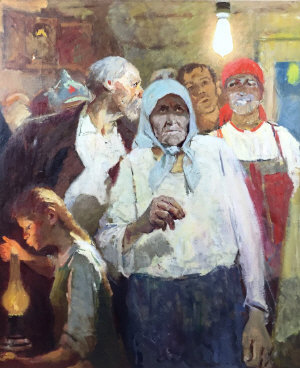 LEVIN Evgeni “The first electric light in the village” 1960